Jamelle Bouie has a piece on Slate in which he reflects on the year since Michael Brown’s death and how it has changed America.

As I read it, I began thinking about how I had been changed by Ferguson. I think it was this photo (shot by Whitney Curtis of the New York Times) that did it: 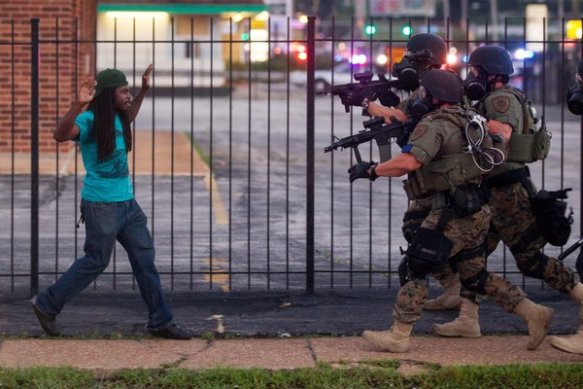 That photo captures a key dynamic in contemporary America: a militarized police force that apparently regards African-Americans as the enemy to be subjugated by means of any force necessary. It’s a photo of White Supremacy and racism exposed for what it is. It’s a photo of our America, an image I can’t get out of my mind because it reveals all of our hypocrisy as well as the evil at the heart of American culture and history.

I went back through my blog to look at how I’ve addressed racism over the years. It’s quite telling. Before the release of the Race to Equity report that detailed the horrific racial disparities in Madison and Dane County, there’s a smattering of references to racism on my blog. Since Ferguson, it’s probably the dominant topic. I’ve preached about it, written about, participated in demonstrations. I’ve read more about racism in the last year than I had in the decades since taking a course on African-American history in college. Racism and America’s culture of violence will be a major focus of our programming at Grace in the coming year.

Boo goes through the litany of deaths and protests and at the end of his recitation, he points out how politicians, mainstream media, and corporations have been forced to address issues of racism. At the end of it all, he writes:

If Ferguson was an earthquake—a tectonic shift in our arguments over race and racism—then a year later, we’re not just feeling the aftershocks. We’re preparing for the next blow.

Bouie did not mention how Ferguson and #BlackLivesMatter have changed American Christianity and I’m looking forward to reading similar retrospectives from theologians and religious commentators.