I’ve posted before about the “Season of Civility” efforts of the Wisconsin Council of Churches. There’s more about that available here. Press coverage here.

It’s not just an issue being raised in Wisconsin. There’s concern across the country.

Joe Klein is on the road again:

I traveled through North Carolina and Virginia, both in areas of deep blue and crimson red, and it was clear neither side trusted the other very much. For the conservatives, the country had changed beyond their imagining; not just civil rights but gay rights (a contentious referendum recently banned gay marriage in North Carolina), and new ethnic groups that seemed foreign–the South Asians who all of a sudden seemed to run half the convenience stores, the Latinos who didn’t seem to want to speak English. Why, even the President of the United States was something strange, neither black nor white. For liberals, it was all about intolerance. You couldn’t have a half-decent conversation with these Tea Party people, they said.

Pamela Haag writes about uncivility in America. She echoes Klein’s observations about the narrowing of our common life:

Incivility seems to me like collateral damage of our deeply niched lives, which make other Americans more unknown and unknowable to us. Sometimes it can feel as if we’re an ensemble of sub-cultures today, and no culture—no shared epistemology or point of view.

There are fewer spaces of social crossing and interaction that “humanize” the other and make them less available targets for our incivility. During the recall, Wisconsin residents reported that tensions were so high and implacable that the only safe topics of social kinship were the Packers and the weather.

Incivility thrives when social life is niched and anonymous. Online comments sections are the most depressing and extreme example of America’s collective hair-trigger temper (it’s as if the nation is suffering from a wicked, mood-destroying hangover that drives them to lash out). In the most basic sense, incivility is a social practice exercised against people whom we do not know, understand, care about, regard, or respect. These people simply aren’t accorded the same rich humanity—they don’t seem as “real” to us—as those who live in our particular niche, or share our ever more sequestered, cabalistic worldview.

Haag also points out that the increase in incivility has occurred simultaneous with the rise of women in the workplace and in prominence across culture.

Corrie and I were driving around southeastern Wisconsin yesterday, and everywhere we went, we saw signs for the upcoming election. Granted, there were many more expressing support for Governor Walker in the countryside and small towns through which we drove than one finds in Madison, but there was evidence of the deep divide throughout our state. In one small town, we saw a yard filled with signs for Walker; right next to it was a house with just as many signs showing support for Barrett. I wonder if those neighbors are on speaking terms. END_OF_DOCUMENT_TOKEN_TO_BE_REPLACED 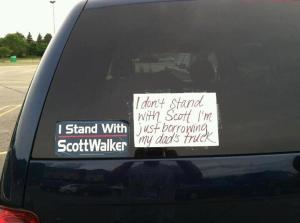 We really do need a “Season of Civility.”

The Wisconsin Council of Churches has issued this statement:

Wisconsin Council of Churches Calls For a
Season of Civility

Thirty six religious leaders from throughout Wisconsin called upon our state to enter into a “Season of Civility” amidst the partisan rancor of the current recall campaigns and the anticipated divisiveness of the fall election cycle.
Read the statement here
The “Call for a Season of Civility” statement draws a parallel between the religious values embodied in “the Golden Rule,” to treat others as we would like to be treated, with the idea of democracy, which is based on regard for the value of each and every individual.
In the statement, our religious leaders commit to model and support respectful and honest conversations on public issues within our congregations, assemblies and forums.
We also call upon candidates to adhere to high standards of civility, integrity and truthfulness in their advertising, including those of “third parties.” We invite all of our citizens to be critical consumers of media and advertising.

We now invite pastors and other local religious leaders to sign the “Call To a Season of Civility” statement.  If you would like to add your name to the list of signatories, send an email with complete contact information to wcoc@wichurches.org.  We will post the list to our web site with weekly updates as signatures are added.

Error: Twitter did not respond. Please wait a few minutes and refresh this page.