We pray for your blessing because without it, we will see only what the eye can see. But with the blessing of your blessing we will see that we are created in your image, whether brown, black or white, male or female, first generation or immigrant American, or daughter of the American Revolution, gay or straight, rich or poor.

We pray for your blessing because without it, we will only see scarcity in the midst of abundance. But with your blessing we will recognize the abundance of the gifts of this good land with which you have endowed this nation.

During the Inaugural, Evangelical superstar pastor Mark Driscoll tweeted this: 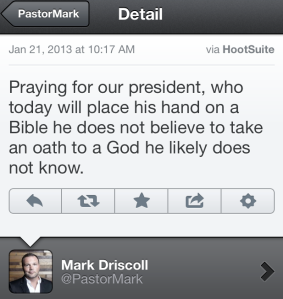 I think Episcopalians would do well to engage in a lively conversation over whether bowing to that tradition of civil religion bodes well for us in the twenty-first century. Today,  I cringe at the Episcopal Church’s association with political power and prestige, and our apparent implicit consent in the wars, torture, use of drones, and assault on civil liberties, as well as domestic policies that have worsened the plight of the weakest in our society.

On the other hand, whatever conversation we might have would be drowned out by those like Driscoll who reject our Christian faith and the president’s; and by the shouting match between the religious right and the secularists who want nothing religious in the Inauguration; for example decrying the use of bibles in oath-taking ceremonies.

Negotiating our faithful journey among those alternatives requires a great deal of prayer, scriptural reflection, and much more humility than most humans have.

some random thoughts and links. A sampling of stories from Religion Dispatches

Commentary on the US Catholic Bishops’ Fortnight for Freedom campaign

Silk points out the bishops’ selective use of history. They began their fortnight on the feast days of Thomas More and John Fisher, both of whom were executed by Henry VIII. Neither of the two were particularly interested in preserving the religious freedom of those who disagreed with them. More, as Henry VIII’s Lord Chancellor, oversaw the execution of many religious dissidents. John Fisher, as Bishop of London, oversaw book burnings and heresy trials. Their appeal to Becket is equally lame.

The civil religion that’s not idolatrous is one that’s prophetic in the sense that it sees the American project as defined by a set of ideals, as opposed to being defined by a set of accomplishments. So if you imagine America as this great nation which has achieved all of these things, and you list all of the things that it’s achieved, in a way you’re already a little bit on the slippery slope toward idolatry. That always has to be held in balance with a recognition of how often and how much the US falls short of its central ideals that are part of the project.

If you asked my true religion, I would not answer anything practiced in a church, synagogue or mosque. My real religion is America, and I feel privileged that, among the world’s 7 billion people, I am one of the roughly 300 million lucky enough to be an American. This transcends mere patriotism. I believe in what this country stands for, even though I acknowledge its limits and failures. As individuals, we are no better than most(selfishness and prejudice having survived). As a society, we have often violated our loftiest ideals (starting with the acceptance of slavery in 1787). Our loud insistence of “exceptionalism” offends millions of non-Americans, who find us exceptional only in our relentless boasting.

Rhetorically, civil religion appears to be opposed to conflict and war; practically, though, it is deeply indebted to both.  For if civil religion is the appropriation of religion by politics, there is nothing more serious for politicians to do than to justify killing and dying, and nothing gets that job done better than coupling religion and war.  If we carry Hunter’s statement above to its conclusion we might note how the culture wars begat the Civil War which begat an American civil religion.