Workers from Lee Manufacturing Co. of Muskego, WI are putting the final touches on new strikers and state-of-the-art bell-ringing technology on the 23 bells that reside in Grace’s bell tower. The first nine were installed in 1874. Additions from the 1950s through the 1970s brought us to our current status. Along the way, all of the bells were made stationary and equipped with an electronic ringing system that has deteriorated over the decades so that in recent years, we’ve only been able to play a half-dozen or so of them. It seemed to me to be poor stewardship of the resources past generations gave Grace not to be able to use them in worship and celebration and after consultation with a number of vendors and a successful campaign to garner the congregation’s support, work began a few weeks ago. I’ve enjoyed learning more about the bells in the past few months.

Apparently, there had been something of a competition among Madison’s churches to have the largest bell. Apparently, with the installation of the “Bishop’s Bell,” weighing 2500 Lbs., Grace emerged victorious.

The nine chime bells were safely deposited in the tower of the Episcopal Church yesterday, and will be raised to their places as fast as possible. A large number visited the church to see them, and all will anxiously await the first peal from the “brazen throated” monsters.

After their installation and use throughout the day on Easter Sunday, 1874, the State Journal noted that:

the chimes were generally regarded as a success, and something on the possession of which the church and the city is to be congratulated, though they will sound better when experience will lead to more skilful ringing. Some tunes sounded beautifully, others, rather discordant. We have heard the opinion expressed that one or two of the smaller bells had not as good a tone as was desirable. This morning there was considerable experimenting on the bells by different parties, and a great deal of jangling. –State Journal April 6, 1874

A few days later, The Daily Democrat disclosed that action was being taken to address the intonation issues:

Slightly out of tune. – The third bell, key of G, in Grace Church tower, has been discovered to be slightly out of tune, and the services of a man were engaged through yesterday in chipping off a portion of the rim, by which means it is proposed to obtain the correct sound.–The Daily Democrat, April 10, 1874

However, as is often the case with contractors, Grace, and the whole city were assured that nothing was amiss:

Those bells are in perfect tune, so says a good judge of music; and Mr. Waters, the gentleman who came with them and superintended their erection, has received assurances that all is well; the money is paid down, and all the members of Grace Church are satisfied that the chime is superior to any in the State. –The Daily Democrat, April 16, 1874 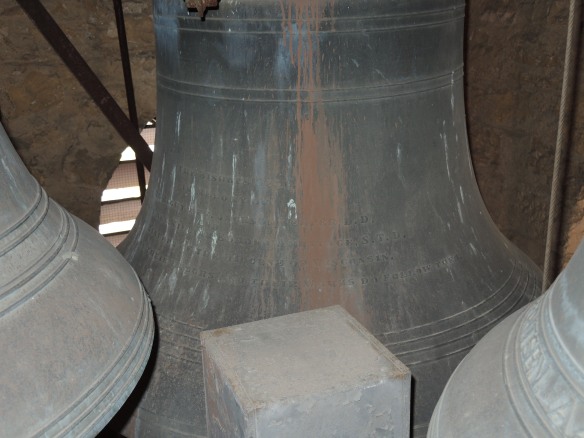 The Bishop’s Bell, E-flat or Tenor Bell, 2500 lbs.from The Jones Company of Troy, NY), dedicated to the memory of Bishop Jackson Kemper, first Bishop of Wisconsin, and Bishop William Armitage.

1 thought on ““The Brazen-Throated Monsters:” Madison’s newspapers’ reporting on Grace’s bells in 1874”