This is going to be an unpopular post. Like almost everyone else in the West (and in the Muslim world, too) I am shocked, saddened, and appalled by the cold-blooded murders of twelve French cartoonists and satirists. But there’s a deeper story here, one that doesn’t fit into the simplistic categories of “the clash of civilizations,” the “war on terror,” or other comfortable slogans.

First, there’s the instructive juxtaposition of an image I came across on Twitter this evening. Yesterday, a bomb exploded at a NAACP office in Colorado. Here’s how the media have treated these two events: 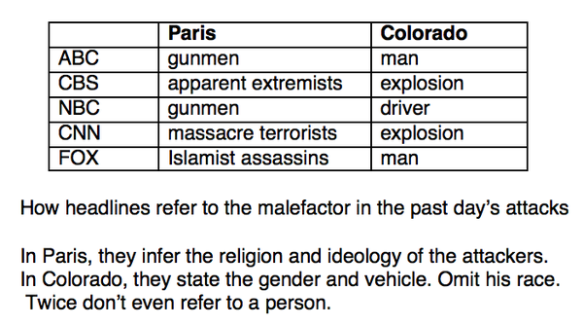 To label an attack “terrorist” is to enter into a discourse that feeds a particular narrative.It also frees us from the responsibility of exploring the reasons for such acts, whether they lie in the immediate or the distant past.

After affirming the abhorrent nature of the attacks,  Richard Seymour points out some uncomfortable truths in The Jacobin:

The first point is that French President Francois Hollande declared this a “terrorist” attack very early on. Now, we don’t need to know any concrete details to understand the purpose of this. “Terrorism” is not a scientific term; it is inherently normative.

The uses of “terrorism” in such contexts are by now well understood. I suggested apropos the Woolwich killing that it functions as a narrative device, setting up a less-than-handful of people as a civilizational threat evoking stoic defense (of “British values,” “la république,” “the West,” etc). It justifies repressive and securitarian responses that tend to target Muslims as such, responses which in the United Kingdom chiefly come under the rubric of the government’s Prevent strategy.

The second is that there is already an enormous pressure, in this context, to defend Charlie Hebdo as a forceful exponent of “Western values,” or in some cases even as a brilliantly radical bastion of left-wing anti-clericalism.

Freddie DeBoer points out that questions of freedom of the press or of expression are “dead moral questions” that don’t need debating. However, he writes that there are questions that need to be explored, for example::

The question of the price that Muslims will pay for these attacks– that is a live question, the security and rights of the Muslim people is very much uncertain, indeed. If there is anything that this country has stood for in the last 15 years, it is its willingness to sacrifice anything to fight Muslim extremism, and in the process, innocent Muslims. We have invaded multiple Muslim countries, sent secret raids into far more, killed Muslims with drones and bombs, wiretapped Muslims at home and abroad, sent agents to infiltrate their mosques, thrown dozens of them into a prison camp without trial or judicial review, assassinated them without due process, tortured them, and spent billions of dollars and thousands of lives in doing so. Of all the things that you should fear your government will lose the resolve to do, fighting Muslim terrorists should be at the absolute bottom of your list. There is no function that our government has performed more enthusiastically for years. Can any credible person doubt our commitment to fighting Muslim terrorists, in 2015?

It’s really quite interesting to see the different way in which “terrorist” has been deployed in two events on two consecutive days. If the Colorado bombing had taken place at a synagogue or church and the suspect a Muslim, the label of “terrorist” would have been immediately and universally deployed. Because the suspect is a balding white man in his forties, he will likely be labelled an isolated, individual crackpot.

I am not veryy conversant with French culture and politics but I do know that it has a long history of aggressive secularism and anti-clericalism and that as a society it has struggled to incorporate in it immigrants from North Africa and elsewhere. Acts like the one today feed into the xenophobia and fascism of right-wing politicians.

Creating, preserving, and broadening civil society does not depend on knee-jerk reactions to abhorrent acts. It requires creating space for people to express their religious views, and practice their religious lives without fear of reprisal or penalty.

2 thoughts on “Thinking about the #CharlieHebdo murders”