Conservative Christians are outraged, outraged, by the SNL parody of Tarantino films: “Djesus Uncrossed.” Yes, it’s over the top as Saturday Night Live always is. It’s in poor taste, but how could it be otherwise, since it’s parodying the tasteless violence and gore of Tarantino. Still, I love the line: critics rave “A less violent Passion of the Christ.”

And a great deal of the outrage, I suspect, is because the parody hits rather too close to home. For many American Christians the image of Jesus Christ presented in the skit is very close to their own–a violent savior who will destroy his enemies. There’s some biblical warrant for such a view:

Or this image from popular American Christianity: 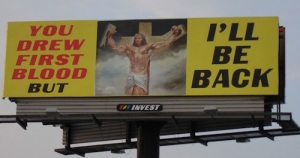 As David Henson points out:

We have tried to arm him with our military-industrial complex, drape him with our xenophobia, outfit him with our weapons, and adorn him with our nationalism. We’ve turned the cross into a flagpole for the Stars and Stripes. We have no need for Tarantino to reimagine the story of Jesus into a fantasy of violent revenge. We’ve done it for him. We’ve already uncrossed him, transforming him from a servant into a triumphalist who holds the causes and interests of our country on his back rather than brutal execution.

The SNL sketch reveals the paucity of American popular theology with its camouflage and flag-draped Bibles that segregate the story of God for American patriots only. It pulls back the curtain and shows us just how twisted our Jesus really is: We want a Savior like the one SNL offers. We want the Son of God to kick some ass and take some names. Specifically, our enemies’ names. And maybe the names of a few godless Democrats. Definitely the Muslims. And the atheists. And the … I could go on.

Christianity in America has become so intertwined with nationalism and patriotism that American conservatives have fashioned an image of Jesus Christ that conforms to their patriotism and to the cult of violence. That image is shaped by popular culture, especially by film. Note the allusion to both Arnold Schwarzenegger and Sylvester Stallone in the billboard above. And just as our popular culture is wedded to the myth of redemptive violence, so too is the Jesus of conservative Christianity like the lead character in so many of our action films, leaving blood, destruction, and mayhem in his wake as he rides through the scenery.

The myth of redemptive violence and the image of Jesus in that myth has been shaped by the language and imagery of Revelation. It’s misleading for critics of that myth and that image of Jesus to deny its presence within scripture. But it’s also important to point out that the Jesus we encounter in the gospels bears no resemblance to the destructive and revenge-seeking Jesus of conservative Christianity. The Jesus of the gospels was killed by an oppressive and violent empire that bears more similarity to our own Empire, than many of the self-proclaimed followers of Jesus today bear to Jesus’ teachings and first followers.

Sure, the SNL parody was in poor taste but it also held a mirror up to the image of Jesus worshiped by much of conservative American Christianity. The more that image is exposed for the idol it is, the better.

1 thought on “The American Jesus: Reflections on Djesus Uncrossed”