Yesterday, Corrie and I toured the Offering of Angels exhibition currently at the Chazen Museum of Art. We were accompanied by Maria Saffiotti Dale, Curator of Paintings, Sculpture, and Decorative Arts at the museum.

It’s well worth a visit, consisting of paintings from the Uffizi Gallery in Florence, most of which are rarely displayed publicly. The paintings are generally tied thematically to the Eucharist and other Biblical and religious subjects, ranging from the Fall to the Resurrection. Most of them date from the sixteenth and seventeenth centuries.

While a number of them are particularly interesting I was drawn to this painting by Cristofano Allori of “Christ being ministered to by the angels.” Allori was a Florentine painter (1577-1621) 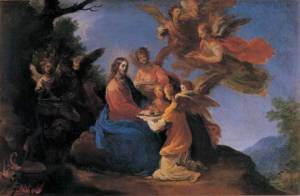 The painting’s placement among images of the resurrection, and just after images of the passion, reminded me of Lk 22:43 “Then an angel from heaven appeared to him and gave him strength.” The more likely parallel is with Mt. 4:11 “Then the devil left him, and suddenly angels came and waited on him.” One can see a demon departing to the left in the painting.

What fascinates me more is the Eucharistic imagery in the painting. Some angels are bringing bread and wine to Jesus while others hold a basin in which Jesus is washing his hands. The exhibition catalog suggests this particular theme appears often in monastic institutions during the Catholic Reformation, especially in rooms designated as refectories.
I’m not sure about that whether that explains this particular image. It’s not very large (32cm x 52cm).

That Jesus is washing his hands as angels bring him bread and wine evokes for me the ablutions a priest makes during the Eucharist so the image might be directed at a priest’s devotions and to underscore the role of the priest as mediator of Christ’s presence to the faithful. A quick search of google images returned no other depictions that included Jesus washing his hands and most were much less obviously Eucharistic in focus.

Also in the exhibition are two other paintings with striking Eucharistic imagery. One is an image of the grieving Madonna by Alessandro Allori (1535-1607)

The other is an image of Christ by Jacopo di Chimenti da Empoli (1551-1640), in which blood from the wound in Jesus’ side empties into a chalice: